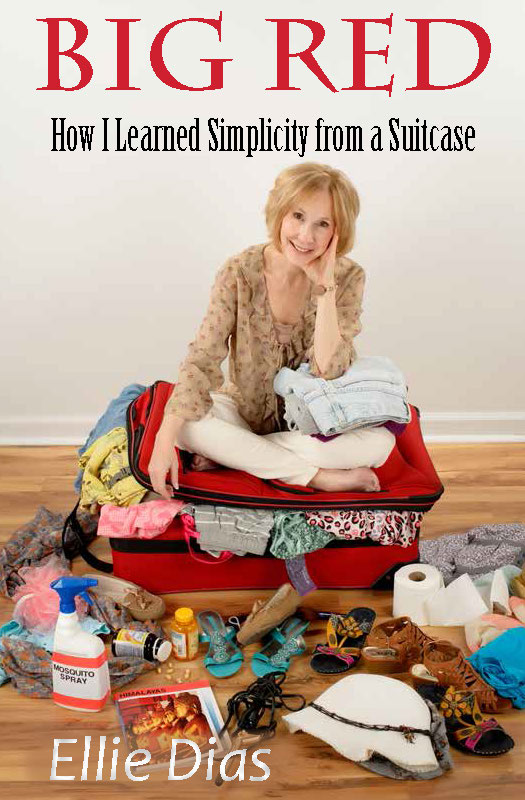 Can a trip of a lifetime planned with an eye to perfection backfire in such a way as to make you seriously question your whole life? Can a suitcase as big as its owner, and stuffed with everything but the kitchen sink, become one’s greatest teacher? Those questions, and more, are answered in my debut book, Big Red: How I Learned Simplicity from a Suitcase.

I set out on a magnificent journey East to ancient Himalayan cultures seeking to experience simplicity and contentment. An obsessive-compulsive perfectionist, I began the adventure with over-the-top preparations and packing. Enter the Big Red Suitcase, weighing 95 lbs and stuffed to capacity with what I was certain a Western woman, bound for the farmlands and jungle of the Himalayas “has to have.”

Dragging this monstrosity jam-packed with twenty-two fashion outfits, tons of toiletries and trail mix, 484 daily supplements, and a half gallon of Permethrin was hilarious at times, but always a glaring symbol of how unbalanced and attached I am to material things much of the time.

My travel adventure was more than a journey. A trip in the broadest sense of the word, it played out like a crazy drama. I was confronted with obstacles at every turn. Nearly every step was fraught with challenges, mishaps, and detours. An ongoing test of patience, determination, and fortitude, everything that could go wrong, did. From swine flu quarantines, being left alone atop an elephant in the Nepali jungle, and the ultimate shock—no real toilets, each day seemed to be another lesson in letting go that I had to learn. Life became one long trek through a reality that was mired in the depths of a cosmic education in Murphy’s Law. It was a fiasco that left me wondering whether the Universe▬via my big red suitcase was trying to teach me something.

My story also reveals the mysticism and pristine nature of the Himalayas, its diverse landscape, remote monasteries and the rich spiritual beliefs and practices of its people that permeates every aspect of their lives.