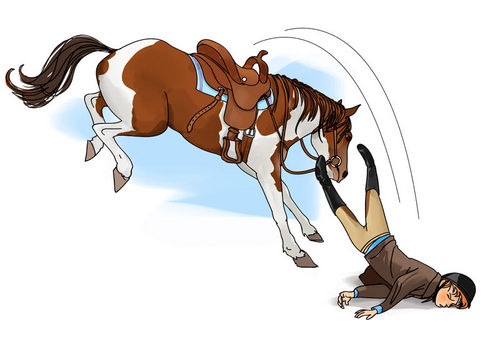 When I get passionate about something, I am driven to experience it. Unfortunately I’ve had a failure or two in my lifetime. For example, there were my many fruitless attempts to play an instrument which included the clarinet, the drums and the flute. I never got to first base with any of them because my parents threaten to make me an orphan if I didn’t quit. I waited a few years before I had the courage to tempt fate. I decided I had to learn how to play the piano. When I was offered a musical instrument free of charge, I purposely neglected to tell my parents that I was bringing home a two-legged pea-green baby grand piano with the help of some friends. Unable to get this monstrosity into the house or find a third leg, this baby wound up hanging out on our front porch for six months until my dad got rid of it. Thus ending my aspirations as a concert pianist.

Those defeats paled in comparison for my desire to learn how to ride a horse. Since child hood I was enamored with them. Raised in the era of Dale Evans, Roy Rogers, Gene Autry and the Lone Ranger, my parents bought me a cowgirl hat, boots, a toy gun with a holster and a vest with lots of fringe. Except for the most important, the horse,  I pretended. I saddled up the arm of the couch with blankets, stirrups and reins made from rope. Swinging my legs across my makeshift saddle I galloped along with Dale and Roy belting out “Happy Trails”.

Still dreaming about galloping through a picturesque field of flowers with my hair blowing in the wind and the sun on my face, I made the call. At the age of 53 I began taking riding lessons. What unfolded during that summer ended up to be survival of the fittest and it wasn’t me. My first horse was named Uncle Buck. The lessons were humiliating. The instructor screamed and shouted, “The left rein Ellie, pull it left, left, left,” or “Squeeze your thighs, squeeze Ellie, squeeze.” Uncle Buck, who was as anxious as I was, lived up to his name and bucked around the coral while I hung on for dear life, and getting slammed against the saddle.

It wasn’t just on the horse that I got battered; it was off as well. I learned the hard way about certain grooming techniques. Rubbing Uncle Buck’s nose and whispering sweet nothings in his ear, the horse in front reared his back leg and gave me a powerful kick to the knee. Doubled over in pain, tears in my eyes, I thought, “What the hell was that for?” Come to find out, one should never step directly in front of a horse’s rear-end. I was benched with a knee that grew twice its size and became lovely shades of purple and blue. That wasn’t the only thing that turned purple. From all the bouncing up and down on the saddle, the inside of my thighs became quite colorful. Unfortunately it was right around the time I had to go for my yearly pelvic exam. I was in a quandary trying to figure out how I would explain the bruising. One thing for sure, I couldn’t leave it up to my doctor’s imagination. Feet in the stirrups (a more secure kind) I blurted, “My husband didn’t do that, I got it from a horse!”  The doctor lifted her head, raised her eyebrows, opened her mouth to say something, decided against it and went back to the exam. Perhaps I should have clarified it a bit more or followed the quote from Rules of Failure. “If at first you don’t succeed, destroy all evidence.” Or…canceled the appointment for six months.

I changed stables and got a new horse named Aura. What could possibly go wrong with a horse named Aura? What couldn’t? What did! During my second lesson Aura got spooked and headed straight for the fence. I was thrown backwards into a position where my entire upper body faced skyward with my head landing on the horse’s ass. Before I could yell out “Hi Ho Silver”, she soared over the fence where I experienced, not only my first gallop, but my first jump. Just not in an upright position. Several lessons later Aura got spooked again. She took off like a bat out of hell and headed straight for the stable. This probably wouldn’t have been much of a concern except the roof of the stable was lower than my upright body, in particular my head. Unless I did something quickly, I was going to become a real life Headless Horseman. Without thinking, I flung myself flat against the horse’s ass, again, as we flew into the stables. This would be the only position I mastered. I gave my parting hugs to Aura and moved on to my third stable. Don’t they say “three times a charm?” Not.

Idiot and determination must share the same spot on my DNA.  It was evident they were fighting for equal billing. When I continued to get battered and thrown about like a twig in a wind storm, I  began to question if my body would hold up under the abuse. In the end it wasn’t being on the horse that made me walk, no run, from my riding passion. It took place inside the stable.

I was lifting the hind leg of Delaney and scraping the muck out with a hoof pick. I had done this before without any difficulty. This time was different. Without warning he suddenly let loose and began to release a large stream of urine, with me as the main target. Trying to escape the deluge I slid into a large pile of shit, fell against the stall door, whacked my head, cut it and bled. Smelling like an outhouse, I walked away and thought of the African proverb, “Do not look where you fell, but where you slipped. I did both.